Most major stock markets fell last week amid concerns central banks could raise interest rates at a faster pace than previously expected. The technology-heavy Nasdaq bore the brunt of rate hike fears, tumbling 4.5% in its biggest weekly decline for nearly
a year. Tech stocks also underperformed within the S&P 500, which finished the week down 1.9%. Stocks in Europe struggled, with the pan-European STOXX 600 slipping 0.3% after inflation in the eurozone hit a record level in December. In contrast, the FTSE 100 added 1.4% as bank stocks, which tend to benefit from interest rate hikes, rallied.

Over in Asia, the Shanghai Composite declined 1.7% as China’s beleaguered property developers continued to
make the headlines and travel restrictions were reimposed in Shenzhen.

The FTSE 100 started this week in the red, falling 0.5% on Monday (10 January) as housebuilders recorded heavy losses. It came after the UK government said it would seek an additional £4bn from property developers to help remove dangerous cladding from low-rise flats.

The STOXX 600 posted its biggest one-day drop since November, sliding 1.5%, as rising bond yields weighed on the technology sector. The sombre mood continued in the US, where the S&P 500 dipped 0.1% as investors braced themselves for a further uptick in inflation in this Wednesday’s consumer price index report. UK and European stocks bounced back at the start of trading on Tuesday, with the FTSE 100 and the STOXX 600 up 0.5% and 1.0%, respectively.

Last week’s economic headlines focused on the minutes from the Federal Reserve’s December policy meeting. The minutes showed Fed officials were concerned about inflation, saying the pace of price increases and supply bottlenecks could continue well into 2022. Together with a tight labour market, the Fed might need to raise interest rates and reduce its holdings of Treasury bonds and mortgage-backed securities sooner than expected.

“Participants generally noted that, given their individual outlooks for the economy, the labour market and inflation, it may become warranted to increase the federal funds rate sooner or at a faster pace than participants had earlier anticipated,” the minutes said. “Some participants also noted that it could be appropriate to begin to reduce the size of the Federal Reserve’s balance sheet relatively soon after beginning to raise the federal funds rate.”

Markets tumbled following the release, with growth stocks hit especially hard. The yield on the two-year Treasury note rose to its highest level since March 2020 when the pandemic hit. It comes after the US consumer price index reached its
highest level in 39 years in November, rising by 6.8% on an annual basis. Meanwhile, data released on Friday showed the US unemployment rate fell by another 0.3% in December to 3.9%, close to its pre-pandemic level of 3.5%. Over the full year, unemployment was down by 2.8 percentage points. 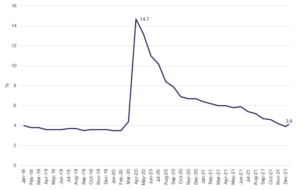 Inflation in the eurozone rose to a higher-than-expected 5.0% in December, a new record high. Economists polled by Reuters had expected the annual rate of inflation to dip slightly to 4.7% from 4.9% in December. According to Eurostat, inflation rose by 0.4% on a monthly basis, driven by price rises for food, alcohol, tobacco and other goods. Energy prices were 26% higher than a
year earlier, although this was a slight slowdown from the previous month. Excluding volatile energy and food prices, core inflation was steady at 2.6%.

The latest data could add pressure on the European Central Bank (ECB) to raise interest rates. Last month, the ECB said it would reduce its monthly asset purchases while continuing its unprecedented level of economic stimulus in 2022.

The average UK property price hit a new record high of £276,091 in December, an increase of more than £24,500 compared to December 2020. This was the strongest annual cash rise since March 2003, according to Halifax. On a monthly basis, prices rose by 1.1%, marking the sixth consecutive month of gains. Russell Galley, managing director at Halifax, said house
prices growth is likely to slow in 2022 amid the prospect of interest rate hikes and increasing pressure on household budgets. “However, there are many variables which could push house prices either way, depending on how the pandemic continues to impact the economic environment,” he added.

Activity in China’s services sector accelerated in December as demand rose and inflationary pressures eased. The Caixin / Markit services purchasing managers’ index rose to 53.1 from 52.1 in November. Input prices rose for the 18th consecutive month, albeit at a slower pace than before. The measure for business expectations remained in positive territory but fell to the
lowest level since September 2020, reflecting concerns about Covid-19 flare-ups in some parts of the country.

What is Environmental, Social and Governance (ESG) Criteria in Investing?