Stock markets were mixed last week as the Bank of England (BoE) warned the UK is expected to slide into a recession this year.

The FTSE 100 managed a positive finish to the week, rising 0.2% despite the BoE’s gloomy outlook being accompanied by the biggest UK interest rate hike for 27 years. The pan- European STOXX 600 fell 0.6% as data showed a steep decline in manufacturing new orders.

US indices were mixed as a much stronger-than-expected jobs report raised concerns that the Federal Reserve will maintain its aggressive pace of interest rate increases. The S&P 500 and the Nasdaq rose 0.4% and 2.2%, respectively, while the Dow fell 0.1%.

*Data from close on Friday 29 July to close of business on Friday 5 August.

FTSE 100 closes at a two-month high

The FTSE 100 gained 0.7% on Monday (8 August) to close at a two-month high, as a rise in crude oil, metal and iron ore prices lifted energy and mining stocks. An unexpected pick up in Chinese exports also boosted investor sentiment. Outbound shipments grew by 18.0% in July from a year earlier, according to official customs data, beating estimates for 15.0% growth.

Wall Street stocks were mostly flat on Monday as investors continued to mull the likely path of interest rate hikes. Data from the Commerce Department suggested high inflation is weighing on business investment, with non-residential fixed investment slipping 0.1% on an annualised basis in the second quarter. On the flipside, consumers’ expectations for where inflation will be in one and three years dropped sharply in July, according to a New York Federal Reserve survey.

The FTSE 100 was flat at the start of trading on Tuesday as investors digested the latest retail sales figures from the British Retail Consortium. Total sales rose by 2.3% year-on-year in July as the heatwave boosted sales of summer clothing, picnic treats and electric fans. However, growth was largely caused by inflation, which masked a dip in sales volumes among many retailers.

UK on course for a year-long recession

Last week’s economic news focused on the BoE’s latest monetary policy committee meeting, in which it voted to increase interest rates by 0.5 percentage points to 1.75%, marking the biggest jump in rates for 27 years.

The Bank said inflationary pressures had intensified significantly, with wholesale gas prices doubling since May due to Russia’s restriction of gas supplies to Europe. The consumer prices index (CPI) is expected to rise to over 13% in the fourth quarter, remain at elevated levels throughout much of 2023, and then fall to below its 2% target by the middle of 2024.

The Bank said the UK is projected to enter into a recession from the fourth quarter, as the latest rise in gas prices leads to “another significant deterioration in the outlook for activity in the UK and the rest of Europe”. Real household post-tax income is projected to fall sharply in 2022 and 2023, and consumption growth is expected to turn negative.

The BoE added that it would “take the actions necessary” to return inflation to the 2% target. “The Committee will be particularly alert to indications of more persistent inflationary pressures, and will if necessary act forcefully in response,” it said.

Economic data for the eurozone was equally bleak. The S&P Global eurozone PMI composite output index dipped below the 50.0 no-change mark in July. At 49.9, down from 52.0 in June, this was the first reduction in private sector business activity since February 2021.

S&P Global said the manufacturing sector was a significant drag on the economy during July, as production volumes fell at the fastest rate since May 2020. Services activity continued to rise overall, but growth slowed to its weakest since the Omicron-related disruption at the start of the year. New export orders fell at the strongest pace for just over two years, while business confidence declined to its weakest level since the initial outbreak of Covid-19 in the first half of 2020.

Chris Williamson, chief business economist at S&P Global Market Intelligence, said: “A much hoped-for surge in consumer spending after the easing of pandemic restrictions is being thwarted as households grow increasingly concerned about the rising cost of living, meaning discretionary spending is being diverted to essentials such as food, utility bills and loan repayments. At the same time, business spending is being subdued by increased caution and risk aversion amid the gloomier economic outlook.”

US nonfarm employment at pre-Covid level

In contrast to the UK and Europe, data from the US seemed to defy recession fears. The latest payrolls report from the Labor Department showed employers added 528,000 nonfarm jobs in July, more than double consensus expectations. Estimates for May and June were revised up by a combined 28,000. 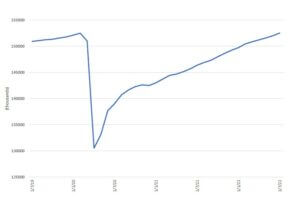 The figures mean that total nonfarm employment in the US has now returned to its pre-pandemic level. Equity markets reacted negatively to the news, fearing that it would boost the case for the Federal Reserve to continue with aggressive interest rate hikes. The central bank has already increased rates by 2.25 percentage points this year, and markets are expecting another 0.75 percentage point hike at its next meeting in September.