The FTSE 100 leapt 4.1%, Germany’s Dax gained 1.6% and the pan-European STOXX 600 rose 1.5%. This was despite warnings of a two-year UK economic slump and higher-than-expected eurozone inflation.

China’s stock markets also rallied, with the Shanghai Composite surging 5.3% on rumours the country was considering relaxing its zero-Covid strategy. These hopes were subsequently quashed over the weekend, when China’s National Health Commission reiterated its commitment to eliminating Covid-19 and said its prevention and control strategy was “completely correct”.

US indices ended the week lower after Federal Reserve chair Jerome Powell said it was “very premature” to consider pausing interest rate hikes. Better-than-expected nonfarm payroll numbers helped the S&P 500 rebound on Friday after a four-day selloff, but the index still finished the week down 3.4%. The Nasdaq sank 5.7% as the fallout from disappointing technology sector earnings continued.

* Data from close on Friday 28 October to close of business on Friday 4 November.

Stocks rise ahead of US CPI

US indices rose on Monday (7 November) as investors looked ahead to Tuesday’s midterm elections and the release of the closely watched consumer price index (CPI) report. The Dow advanced 1.3% and the S&P 500 added 1.0%.

In contrast, the FTSE 100 slipped 0.5% on Monday as the denial of any easing of China’s zero-Covid policy dented investor sentiment. In economic news, data from Halifax showed house prices fell by 0.4% month-on-month in October, the steepest monthly decline since February last year. The blue-chip index extended declines at the start of trading on Tuesday, as figures from BRC/KPMG showed UK retail sales slowed in October.

BoE lifts base interest rate to 3.0%

Last week, the Bank of England’s monetary policy committee (MPC) voted to increase the base interest rate by 0.75 percentage points – the biggest rate hike since 1989. The base rate now stands at 3.0%, up from just 0.1% in December last year. The BoE warned of a “very challenging outlook”, with the economy forecast to remain in recession for two years until mid-2024 and unemployment rising to 6.4%.

BoE governor Andrew Bailey said that while the Bank couldn’t make any promises about future interest rates, “we think [the] bank rate will have to go up by less than currently priced into financial markets.” The BoE pointed out that if rates rose to 5.25%, inflation would fall to zero in three years’ time. This suggests smaller rate hikes would be needed to return inflation to the 2% target. Following the MPC meeting, markets now expect interest rates to peak at about 4.6%.

Whereas the BoE’s comments were seen as relatively dovish, the chair of the Federal Reserve adopted a hawkish tone after US interest rates were lifted by 0.75 percentage points, in line with expectations.

A statement by the Federal Open Market Committee was interpreted by markets as a signal that the central bank could slow the pace of rate hikes. In a post-meeting press conference, however, Powell said interest rates would peak at a higher level than previously expected and that the Fed has “some ways to go” in its attempt to rein in inflation. He also hinted that the central bank preferred to raise interest rates too high, potentially sparking a recession, rather than risk keeping rates too low to bring down inflation.

“If we were to overtighten, we could then use our tools strongly to support the economy,” he said, in comments reported by the New York Times. “Whereas if we don’t get inflation under control because we don’t tighten enough, now we’re in a situation where inflation will become entrenched. And the costs – the employment costs, in particular – will be much higher.”

Last week also saw the release of the latest eurozone inflation figures. According to Eurostat, annual inflation rose to a higher-than-expected rate of 10.7% in October, up from 9.9% in September. This was driven by surging energy prices, which increased 41.9% year-on-year. Food, alcohol and tobacco prices also rose sharply, by 13.1% year-on-year. 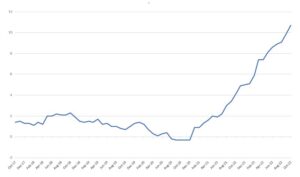 On Friday, European Central Bank (ECB) president Christine Lagarde reiterated the ECB’s focus on bringing down inflation. She said that in order to avoid fuelling prices, member states should stick to temporary and targeted support for households affected by the cost-of-living crisis.

Elsewhere, JPMorgan’s global manufacturing purchasing managers’ index (PMI) fell further into contraction territory in October, slipping to 49.4 from 49.8 in September. The output index signalled a third successive monthly drop, with the rate of decline accelerating to the fastest since June 2020. Of the 31 economies included in the survey, 21 reported falling production. The eurozone and the UK saw marked downturns on the back of weak demand, while the pace of growth in North America remained only marginal. The gauge of business optimism fell to its lowest level since May 2020 and was particularly weak across the eurozone, UK and US.