Stocks mixed as US earnings season ramps up

Equities were mixed last week as investors weighed mostly positive US earnings reports against the threat of rising interest rates.

The pan-European STOXX 600 fell 0.7% after European Central Bank (ECB) president Christine Lagarde declined to rule out an increase in interest rates this year. Germany’s Dax fell 1.4% and France’s CAC 40 slipped 0.2%. The UK’s FTSE 100 edged up 0.7%, despite the Bank of England’s (BoE) decision to hike the base interest rate for a second month in a row.

Over in the US, the S&P 500 finished a volatile week up 1.6% as investors digested fourth quarter earnings reports from big technology companies including Alphabet (Google’s parent), Amazon, and Meta (formerly Facebook). A surprise jump in US payrolls pushed the yield on the ten-year US Treasury note to its highest level since 2019.

US equities started this week in the red, with the S&P 500 and the Nasdaq down 0.4% and 0.6%, respectively, on Monday (7 February) following a selloff in big tech names. Investors are set to receive another batch of fourth quarter earnings in the coming days, including Disney, Pfizer and Coca-Cola. Meanwhile, the consumer price index, due on Thursday, is expected to add further weight to the case for hiking interest rates.

Germany’s Dax managed a 0.7% gain on Monday, despite data showing the country’s industrial output fell by 0.3% month-on-month in December, driven by supply chain bottlenecks and a decline in construction. In the UK, house prices rose 0.3% in January from the previous month, the slowest pace since June. Halifax said house price growth is expected to slow considerably over the next 12 months as households grapple with the cost-of-living crisis.

At the start of trading on Tuesday, the FTSE 100 was up around 0.6% as the latest BRC-KPMG survey showed total retail sales increased by 11.9% in January from a year ago.

Last week, the BoE’s monetary policy committee voted to increase the base interest rate by 25 basis points to 0.5%. This marked the first back-to-back rate hike since 2004. It came after data revealed UK inflation surged to a 30-year high in December amid rising energy costs and ongoing supply chain issues. The BoE also raised its inflation forecast to an April peak of 7.25%, which would be the highest since 1991.

The Bank warned that UK households would see their inflation-adjusted post-tax disposable income fall by 2% this year because of higher energy bills, taxes, and comparatively weak earnings. This would be the biggest fall ever recorded. Noting that higher costs would depress consumer spending and economic growth, the Bank cut its gross domestic product (GDP) growth forecast for 2022 from 5.0% to 3.75%.

The BoE’s report came shortly after Ofgem said households on default variable gas and electricity tariffs and those with prepayment meters would see their bills rise by around £700 in April, a 54% increase. In response, chancellor Rishi Sunak announced households would get £200 off energy bills in October, to be repaid over five years. Those in council tax bands A to D will also receive a £150 rebate.

ECB ‘much closer’ to inflation target

The odds of the ECB hiking interest rates this year have increased after Lagarde said the bank was “getting much closer” to hitting its target on inflation. Lagarde did not explicitly rule out increasing interest rates, but instead said there was consensus among ECB policymakers about the decision to keep rates unchanged.

“Compared with our expectations in December, risks to the inflation outlook are tilted to the upside, particularly in the near term,” Lagarde said.

She added: “We are all concerned to take the right steps at the right time, and I think there was also a concern and a determination around the table not to rush into a decision unless we had a proper and thorough assessment based on data and the analytical work that will take place in the next few weeks.” Lagarde’s comments have been described as hawkish, and interpreted as signalling a shift to tightening monetary policy from March.

US nonfarm payrolls jumped by 467,000 in January despite surging Omicron infections. This was well ahead of the 150,000 increase predicted in a Dow Jones poll, and came a week after the government warned the numbers could be low because of the pandemic. 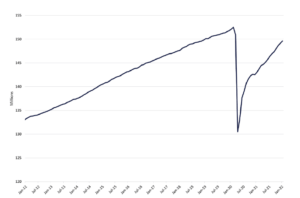 The Labor Department report also contained sizeable revisions to data from the previous two months. December’s increase was lifted from 199,000 to 510,000, and November’s from 249,000 to 647,000. These changes brought the total for 2021 to just under 6.67 million, the biggest single-year gain in US history.

Earnings also rose sharply by 0.7% from the previous month and by 5.7% on an annual basis, providing further confirmation that inflation is accelerating. The unemployment rate edged higher to 4.0% from 3.9% in December. However, a broader measure of unemployment, which includes people who want to work but have given up searching and those working part-time because they cannot find full-time employment, dropped from 7.3% to 7.1%, the lowest since February 2020.