Most major stock markets fell last week as investors continued to question whether the Federal Reserve’s attempts to rein in inflation could spark a US recession.

The S&P 500 finished its four-day trading week down 1.2% as JPMorgan Chase CEO Jamie Dimon warned an economic “hurricane” was on the horizon. News that Elon Musk had told his fellow executives that Tesla might have to cut 10% of its staff over his “super bad feeling” about the global economy also dented investor sentiment. The Dow declined 0.9% while the Nasdaq lost 1.0%.

Concerns about slowing economic growth and inflation also weighed on stocks in Europe. The pan-European STOXX 600 fell 0.9% while Germany’s Dax was largely flat. The FTSE 100, which was closed on Thursday and Friday to celebrate Her Majesty Queen Elizabeth II’s Platinum Jubilee, slipped 0.7% through Wednesday.

In Asia, Japan’s Nikkei surged 3.7% as the authorities announced a relaxation of Covid-19 restrictions on foreign tourism and the Bank of Japan said it would continue with monetary easing. China’s Shanghai Composite rose 2.1% after the government gave further details of stimulus measures that aim to revive the economy in the wake of Covid-19 lockdowns.

Stocks rallied on Monday (6 June) after the Wall Street Journal reported that regulators in China were close to finishing their investigation into three US-listed firms, including the ride-hailing app Didi. Shares in Didi and the wider technology sector surged, helping Hong Kong’s Hang Seng rise 2.7% on Monday.

The S&P 500 and the Nasdaq gained 0.3% and 0.4%, respectively, as investors looked ahead to Friday’s US inflation report. UK and European shares also advanced, despite prime minister Boris Johnson facing a no-confidence vote later that day. After scraping through with a margin of 211 to 148 votes, it is widely speculated that Johnson will face renewed challenges to his leadership.

The FTSE 100 slipped 0.1% at the start of trading on Tuesday as figures from KPMG and the British Retail Consortium (BRC) showed retail sales fell at an annual rate of 1.1% in May, the biggest drop since January 2021. BRC chief executive Helen Dickinson said the cost-of-living crunch had squeezed consumer demand.

US economic data better than expected…

Last week’s slew of economic data seemed to contradict fears of an impending US recession. Figures from the Labor Department showed employers added 390,000 nonfarm jobs in May, slower than the upwardly revised 436,000 in April but much higher than expectations of around 328,000. Weekly jobless claims were lower than expected, falling by 11,000 to 200,000 in the week ending 28 May.

Elsewhere, the Institute for Supply Management’s (ISM) gauge of manufacturing activity unexpectedly advanced in May as new orders and output growth quickened. The index increased to 56.1 from 55.4 in April, exceeding estimates of around 54.5 in a Bloomberg poll. The ISM’s gauge of services activity fell to 55.9 from 57.1, but remained well above the 50.0 mark that separates growth from contraction.

The survey also showed purchasing intentions for cars, homes and major appliances all cooled. Lynn Franco, senior director of economic indicators at The Conference Board, said this was likely a reflection of rising interest rates and consumers pivoting from big-ticket items to spending on services.

Inflation in the eurozone soared to a fresh record high of 8.1% in the 12 months to May, up from 7.4% in April, according to Eurostat’s flash estimate. This was higher than the 7.7% annual rise forecast by economists in a Reuters poll and marked the seventh month in a row that inflation has hit a new high. 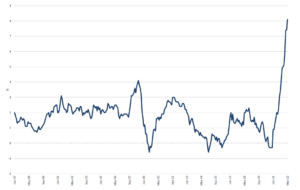 The data could put pressure on the European Central Bank (ECB) to raise interest rates at a more aggressive pace than previously outlined. Markets are pricing in slightly more than four consecutive 0.25% rate rises at each of the ECB’s meetings between July and December. The ECB’s key deposit rate is -0.5% and has been negative since 2014.

Travel Insurance and Why You Need It