Stock markets experienced another week of heavy losses last week as the conflict in Ukraine escalated.

The pan-European STOXX 600 and the FTSE 100 both lost around seven percentage points, while Germany’s Dax and France’s CAC 40 plunged by more than 10%. Losses were particularly heavy on Friday as ceasefire talks failed and Russia seized control of a nuclear power plant.

Over in Asia, Japan’s Nikkei 225 slipped 1.9%, with concerns about tightening monetary policy in the US also weighing on investor sentiment.

Oil prices soared at the start of trading on Monday (7 March) as the US and Europe mulled a ban on imports of Russian oil. In the first few minutes of trading, the price of Brent crude oil surged to $139 a barrel, the highest since July 2008. 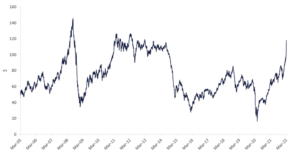 On Sunday, US secretary of state Antony Blinken said the Biden administration and its allies were discussing a ban on Russian oil supplies. Later, US House of
Representatives speaker Nancy Pelosi said the chamber was exploring legislation “that will further isolate Russia from the global economy.”

The surge in oil prices was accompanied by another day of losses for global stock markets. In the US, the S&P 500 closed the day down 3.0%, the Nasdaq lost 3.6% and the Dow slipped 2.4% amid fears the conflict could hinder US economic growth and add further inflationary pressure. The pan-European STOXX 600 declined 1.1% and the FTSE 100 slipped 0.4%, with news of a ceasefire offer from Moscow helping to limit losses.

In economic news, figures released last week showed inflation in the eurozone surged by a record 5.8% year – on – year in February, up from 5.1% in January and above the 5.4% forecast by economists. Energy prices soared by 31.7%, while unprocessed food prices increased by 6.1%, according to Eurostat.

The European Central Bank (ECB) faces the difficult dilemma of whether to raise interest rates in an attempt to combat soaring inflation. Several ECB governing council members have said policy decisions should be delayed because of the uncertainty caused by the Ukraine war. Meanwhile, the heads of the Portuguese and Greek central banks warned the crisis risks plunging the eurozone into a period of stagflation — a mix of stagnating growth and inflationary supply pressures.

According to the Financial Times, Fabio Panetta, an ECB executive board member, said: “We should aim to accompany the recovery with a light touch, taking
moderate and careful steps as the fallout from the current crisis becomes clearer.”

Here in the UK, growth in the services sector accelerated sharply in February as the Omicron wave of Covid-19 subsided. The headline seasonally adjusted IHS Markit/CIPS UK Services PMI Business Activity Index rose to 60.5 from 54.1 in January, the fastest rise in output since June last year. Respondents said market demand and client confidence improved alongside the reduction in pandemic-related disruption, thereby supporting growth
of activity.

However, input costs increased substantially in February, with the rate of inflation the second-fastest in more than a quarter of a century of data collection. The rate of output price inflation hit a fresh record high for the second month running, with around one-third of respondents raising their selling prices during the month.

Andrew Harker, economics director at IHS Markit, said: “Although the latest set of PMI data were encouraging, the inflationary picture still has the potential to limit growth, while it remains to be seen what impact the Russian invasion of Ukraine will have on the service sector and wider economy. As such, there are still
downside risks even as disruption from the pandemic finally appears to be fading.”

In the US, meanwhile, figures from the Labor Department showed non-farm payrolls rose by 687,000 in February, far greater than the 400,000 increase expected by economists. This was led by hiring in leisure and hospitality, education, and health services. The unemployment rate fell from 4.0% to 3.8%, whereas the annual rate of growth in average hourly earnings slowed from 5.7% to 5.1%.

Federal Reserve chair Jerome Powell described the labour market as extremely tight, and said he would support a 0.25% increase in interest rates at the central
bank’s March policy meeting and would be “prepared to move more aggressively” later on if inflation does not start to ease.

How and Why You Should Keep Up with Financial News