US stocks gave a lacklustre performance last week to cap their worst quarter since the start of the pandemic
in early 2020.

The S&P 500 ended the week largely flat, taking its loss for the quarter to nearly 5%, as the ongoing war in Ukraine weighed on investor sentiment. Bond yields were in focus after an often-cited recession indicator was triggered when the two-year and ten-year Treasury yields inverted for the first time since 2019.

After a volatile few days of trading, UK and European indices finished the week mostly higher despite concerns about the macroeconomic outlook. The pan-European STOXX 600 added 1.1%, Germany’s Dax gained 1.0% and the FTSE 100 rose 0.7%.

Over in Asia, Japan’s Nikkei 225 declined 1.7% as sentiment among Japanese manufacturers fell in the first quarter for the first time since the start of the pandemic. China’s Shanghai Composite advanced 2.2% after the government indicated it would provide support for the economy and markets.

Stocks started this week in the green, with the FTSE 100 edging up 0.3% on Monday (4 April) despite data showing UK consumer confidence suffered its biggest fall in March since 2008. PwC’s consumer sentiment index fell to -20 after peaking at +10 in June last year. The 30-point drop in nine months was the biggest sustained fall since the global financial crisis. PwC said the cost-of-living crisis was causing post-pandemic pent-up demand in discretionary spending to “all but evaporate”.

The pan-European STOXX 600 added 0.9% on Monday as investors digested news that Western nations might impose further sanctions on Russia.

UK and European stock markets were down at the start of trading on Tuesday ahead of the latest UK services purchasing managers’ index.

Dubbed “Bleak Friday” by several newspapers, 1 April marked the day that price rises for many UK household bills came into effect. The most notable of these was a 54% rise in the price cap on energy bills. A household using a typical amount of gas and electricity will now
pay almost £700 a year more than they did last year. Council tax, water bills and car tax have also increased for some households.

It isn’t just consumer confidence that is being affected by soaring prices. A closely watched gauge of business sentiment showed economic confidence collapsed in March. The index from the Institute of Directors (IoD) plunged from -4 in February to -34 in March, the lowest since October 2020. Over half (53%) of business leaders said the cost of energy is exerting a negative impact on their organisation, three times as many as a year ago. Business leaders’ expectations of inflation continued to rise.

Kitty Ussher, chief economist at the IoD, said: “Business has experienced a dramatic collapse in confidence following the invasion of Ukraine, leading to many firms putting investment plans on hold. The reality of higher energy and commodity prices, plus the hike in employment taxes, all overlaid with a general climate of deep uncertainty, is now having a real economic impact.”

The eurozone is also witnessing surging consumer prices. According to Eurostat’s latest flash estimate, the annual rate of inflation reached a record 7.5% in March, accelerating from the previous record of 5.9% in February. This was far higher than the expected 6.6% increase. 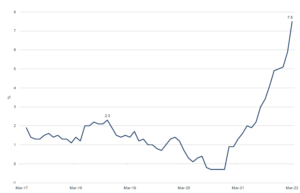 Energy was the main contributor to the increase, as the war in Ukraine and sanctions on Russia pushed fuel and natural gas prices to record highs. There were also increases in the prices of food, services and durable goods.

According to the Financial Times, the figures have prompted some European Central Bank (ECB) policymakers to call for the central bank to bring forward its plan to end net asset purchases and to raise interest rates for the first time in more than a decade. So far, the ECB has only announced plans to stop net bond purchases by September, when it will decide if inflation will stay high enough to justify a rate increase.

US nonfarm payrolls lower than expected

The US economy added 431,000 jobs in March, down from 750,000 the previous month and below the expected 490,000. Despite missing forecasts, the figures are still considered strong and show the tight labour market is persisting. Jobs growth averaged 562,000 per month in the first quarter of 2022, the same as the average monthly gain for 2021, as the lifting of Covid-19 restrictions and strong consumer demand kept labour demand high.

The data from the Bureau of Labor Statistics also showed the unemployment rate fell by 0.2 percentage points to 3.6%, the lowest level since before the pandemic. Average hourly earnings rose by 0.4% from the previous month, or by 5.6% from a year ago, as businesses competed for talent and rushed to fill a near-record number of job vacancies.

In other US economic news, personal spending, which accounts for more than two-thirds of US economic activity, rose by only 0.2% in February after an upwardly revised 2.7% gain the previous month. Spending on services rose by 0.9%, the most in seven months, whereas spending on goods fell 1.0% led by a slump in purchases of motor vehicles.

How to Stay Ahead Financially in Hard Times