Stocks continued their downward trajectory last week as the fallout from the mini-budget caused turmoil in UK financial markets.

The FTSE 100 lost 1.8% after the Bank of England (BoE) said the government’s new fiscal policy would require a “significant monetary response”, raising fears of a large interest rate increase in November. The pan-European STOXX 600 and Germany’s Dax lost 0.7% and 1.4%, respectively.

Concerns about the UK’s financial stability weighed on stock markets in the US, where investors were also digesting news of higher-than-expected US inflation. The S&P 500 finished the week 2.9% lower, registering a third consecutive quarter of declines for the first time since 2009. The Dow lost 2.9% and the Nasdaq fell 2.7%.

In Japan, the Nikkei tumbled 4.5% to finish the week at a three-month low as the US dollar continued to strengthen against Asian currencies. China’s Shanghai Composite shed 2.1% after the Caixin/Markit manufacturing purchasing managers’ index fell to a lower-than-expected 48.1 in September.

*Data from close on Friday 23 September to close of business on Friday 30 September.

The FTSE 100 edged up 0.2% on Monday (3 October) after the government scrapped plans to axe additional-rate income tax. Chancellor Kwasi Kwarteng said in a tweet that the proposed abolition of the 45% tax rate had “become a distraction for our overriding mission to tackle the challenges facing our country”. Kwarteng also announced that the publication of his medium-term fiscal plan would be brought forward from 23 November to the end of October.

The tax cut u-turn drove a decline in the US ten-year Treasury yield, which in turn boosted interest rate-sensitive growth stocks. The three major Wall Street indices ended Monday’s trading session more than two percentage points higher. The stock market rally continued into Tuesday, with the FTSE 100 and STOXX 600 up 1.3% and 1.8%, respectively, at the start of trading.

The BoE launched a temporary bond-buying programme last week in an attempt to restore orderly market conditions. It came after the tax-cutting measures in the mini-budget sparked a slump in the pound and a selloff in government bonds.

The Bank warned that if dysfunction in the long-dated government bond market continued, there would be a “material risk to UK financial stability”. It said it will buy bonds “on whatever scale is necessary” from 28 September until 14 October, and those purchases will be unwound once market conditions stabilise.

The announcement last Wednesday had an immediate effect on 30-year bond yields, which fell back to 4.3% after rising above 5% earlier in the day. Although the BoE ruled out an emergency interest rate hike, it is expected to increase rates more aggressively at its next policy meeting in November. 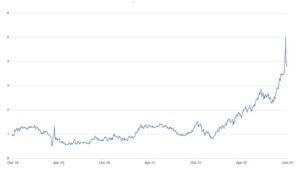 In more positive news, revised economic data from the Office for National Statistics (ONS) implied the UK is not currently in a recession – defined as two consecutive quarters of declining gross domestic product (GDP). The figures showed GDP increased by 0.2% in the second quarter, instead of shrinking by 0.1% as previously estimated. There were increases in services and construction output, whereas production output fell. The data also showed that while household savings fell back in the second quarter, households saved more during and after the pandemic than previously estimated.

US inflation higher than expected

Over in the US, the Federal Reserve’s key inflation gauge, the core personal consumption expenditures price index (excluding food and energy), rose by an annualised 4.9% in August and by 0.6% from the previous month. Both figures marked an acceleration from a month earlier and exceeded economists’ forecasts, cementing expectations of further interest rate hikes.

There are signs that rate hikes are starting to impact the US housing sector. Pending home sales fell in August by 2.0% month-on-month and 24.2% year-on-year, according to the National Association of Realtors (NAB). The NAB said decade-high mortgage rates had “deeply cut into contract signings”. House prices, as measured by the S&P CoreLogic Case-Shiller Index, cooled between June and July at the fastest rate in the index’s history.

Inflation in the eurozone hit a new record high for the 11th month running in September as energy bills continued to soar. Consumer prices rose 10.0% from a year ago, accelerating from August’s increase of 9.1%. Energy prices surged by 40.8% year-on-year, while food, alcohol and tobacco prices rose 11.8%, according to Eurostat’s flash estimate. Core inflation, which excludes energy and food, increased by 4.8%, up from 4.3% in August. Inflation in Germany hit a new 71-year high of 10.9%

The figures came after European Central Bank president Christine Lagarde said the eurozone’s economic outlook was darkening and business activity was expected to slow substantially in the coming months.