Equities start 2022 on a strong footing

Global equities made solid gains in the final week of 2021 to start the new year on a strong footing. A ‘Santa Claus rally’ helped the S&P 500 reach new record highs and end the week up 0.9%, as fears about Omicron waned. The Dow also gained 1.1%, while the technology focused Nasdaq was flat.

The pan-European STOXX 600 and the FTSE 100 ended their holiday-shortened trading weeks up 1.1% and 0.2%, respectively, with the latter closing near its highest level for 2021, despite surging coronavirus infections.

US indices hit fresh record highs
The S&P 500 and the Dow hit new record highs on their first trading day of 2022, rising by 0.6% and 0.7%, respectively, on Monday (3 January). Easing concerns about the economic impact of Omicron helped to boost investor sentiment, despite rising case numbers. Bank stocks performed particularly strongly on speculation the Federal Reserve could lift interest rates earlier than expected.

The FTSE 100 also rose in its first trading session of 2022, gaining 1.6% on Tuesday to finish above 7,500 for the first time in almost two years. The IHS Markit/CIPS manufacturing purchasing managers’ index (PMI) measured 57.9 in December, up from an initial reading of 57.6 although slightly below November’s three-month high of 58.1. Companies maintained a positive outlook at the end of 2021, with 63% forecasting that production would increase over the coming 12 months, compared to only 6% anticipating a contraction.

The STOXX 600 also rose by 0.8% on Tuesday, with travel and leisure stocks surging after the UK’s vaccine minister said Britons hospitalised with Covid-19 are generally showing less severe symptoms than before.

At the start of trading on Wednesday, the FTSE 100 was down 0.2% ahead of the release of the Federal Reserve’s December meeting minutes later in the day.

US jobless claims fall despite Omicron
US weekly jobless remained close to their lowest level for over 50 years in the week ending 25 December, showing the rapidly spreading Omicron variant has yet to impact employment. Initial claims for state unemployment benefits totalled 198,000, less than the 205,000 forecast by economists and 8,000 lower than the previous week, according to the Labor Department data. 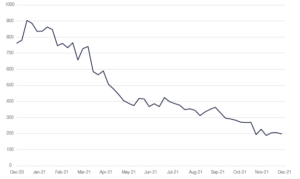 Continuing claims – which measures the number of unemployed people who have already filed a claim and continue to receive weekly benefits – fell by 140,000 to 1.72 million in the week ending 18 December. This was the lowest level since 7 March 2020, just before the first wave of Covid-19 lockdowns.

Investors are now waiting for the latest monthly employment figures, which will be released on 7 January. Economists polled by Reuters expect the unemployment rate to edge down to 4.1% in December from the 21-month low of 4.2% in November.

Festive retail sales soar
In another sign that Omicron is having a milder effect on economic activity, US retail sales surged by 8.5% during this year’s holiday shopping season (1 November to 24 December). This was the biggest annual increase in 17 years, according to the Mastercard data. Online sales grew by 11.0% compared to the same period last year, while sales at physical stores rose by 8.1%.

“Shoppers were eager to secure their gifts ahead of the retail rush, with conversations surrounding supply chain and labour supply issues sending consumers online and to stores in droves,” said Steve Sadove, senior adviser for Mastercard. “Consumers splurged throughout the season, with apparel and department stores experiencing strong growth as shoppers sought to put their best dressed foot forward.”

Covid restrictions tighten
Several countries in Europe tightened their coronavirus restrictions last week as infections surged to record levels. In France, where daily infections reached a new high, the government announced that from 3 January people must work from home if they can and public gatherings will be limited to 2,000 people for indoor events. Other countries cancelled official new year celebrations, and introduced limits on bar and restaurant opening hours.

Over in China, which is holding on to its zero-Covid strategy, 1.2 million people were placed into strict lockdown in Yuzhou in the Henan province this week, joining 13 million others who have been locked down in Xi’an for almost a fortnight.

China manufacturing PMI beats forecasts
China’s official manufacturing PMI beat forecasts in December, rising to 50.3 from 50.1 in November, according to the National Bureau of Statistics. Analysts had expected it to fall slightly to the 50-point mark that separates growth from contraction. Activity in the services sector also grew at a slightly faster pace in December, rising to 52.7 from 52.3 the previous month.

What is Environmental, Social and Governance (ESG) Criteria in Investing?