US indices managed to shrug off news of a contraction in US gross domestic product (GDP) and another 75-basis point (bps) interest rate hike. The S&P 500 gained 4.3%, the Dow rose 3.0% and the Nasdaq surged 4.7%.

The pan-European STOXX 600 and the FTSE 100 advanced 3.0% and 2.0%, respectively, after data showed the eurozone economy expanded by more than expected in the second quarter.

In contrast, Japan’s Nikkei slipped 0.4% after the government downgraded its forecast for economic growth in the fiscal year ending March 2023 from 3.2% to 2.0%, citing slowing overseas demand and rising consumer inflation.

China’s Shanghai Composite eased 0.5% as a high-level meeting of the Communist Party omitted mention of its GDP growth goal and instead said China should “strive to achieve the best possible results”.

*Data from close on Friday 22 July to close of business on Friday 29 July.

US indices fall after best month since 2020

After July proved to be their best month since 2020, US indices fell on Monday (1 August) as investors feared US House speaker Nancy Pelosi’s potential visit to Taiwan could worsen tensions between China and the US. The S&P 500 slipped 0.3%, the Nasdaq lost 0.2% and the Dow shed 0.1%. Asian stocks suffered on Tuesday, with the Shanghai Composite and Hang Seng down 2.3% and 2.4%, respectively, after Beijing reportedly said it would retaliate with “forceful measures” if the trip goes ahead.

In economic news, data from S&P Global showed UK manufacturing output contracted for the first time in over two years in July because of reduced intakes of new work, weaker market demand, difficulties in sourcing components and transport delays.

US slips into a technical recession

Figures released last week showed the US economy shrank for a second consecutive quarter, meeting one of the most common criteria for a technical recession. GDP shrank by an annualised 0.9% in the second quarter, following a 1.6% contraction in the first quarter, according to the Commerce Department. Economists polled by Reuters had forecast GDP would rebound at a rate of 0.5% in the second quarter. 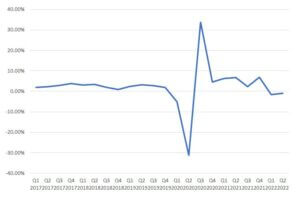 While back-to-back quarterly GDP contractions meet one definition of a recession, the National Bureau of Economic Research is responsible for making the official call on whether the economy is in a recession. One of the factors it looks at is employment, which remains strong.

Treasury secretary Janet Yellen stated last week: “Most economists and most Americans have a similar definition of recession: substantial job losses and mass lay-offs, businesses shutting down, private-sector activity slowing considerably, family budgets under immense strain. In sum, a broad-based weakening of our economy. That is not what we’re seeing right now.”

Fed hikes rates by another 75bps

The US Federal Reserve approved its second consecutive 75bps interest rate hike last week, taking its benchmark rate to a range of 2.25-2.5%. Investors were largely expecting the move and were cheered by relatively dovish comments by Fed chair Jerome Powell that future rate increases would depend on the data.

“As the stance of monetary policy tightens further, it likely will become appropriate to slow the pace of increases while we assess how our cumulative policy adjustments are affecting the economy and inflation,” he said.

In the eurozone, a surge in tourism helped the economy expand by more than expected in the second quarter. According to Eurostat’s preliminary flash estimate, GDP grew by 0.7% when compared with the previous quarter, much higher than the 0.1% growth forecast by economists. France, Italy and Spain all saw an expansion in GDP, whereas Germany’s economy stagnated.

Inflation in the eurozone is expected to hit a new high of 8.9% in July, up from 8.6% in June, driven by price rises in energy and food. There are concerns this could lead to interest rate rises and weigh on growth during the second half of the year. There are also fears that a reduction in gas flows through the Nord Stream 1 pipeline from Russia to Germany could spark a recession.

Elsewhere, the European Commission’s economic sentiment indicator for the euro area fell from 103.5 in June to 99.0 in July, below its long-term average. Industrial confidence fell by 3.5 points, while sentiment in the services sector declined by 3.4 points.

Here in the UK, data from the Bank of England showed consumers borrowed a net £1.8bn in June, double the £0.9bn in May, most of which was on credit cards. The annual growth rate for consumer credit rose to 6.5%, the highest level since before the pandemic.

The figures have raised concerns that people are resorting to borrowing to fund the rising cost of living. Gas and electricity bills for some of the most vulnerable households could reach an average of £500 a month in January, according to BFY Group, an energy management consultancy.

Why Is It Important to Designate Beneficiaries?