North American and European markets rose last week amid prospects that interest rate rises to tackle inflation may not be as steep as previously predicted, but a different story emerged from Asia.

Reports that the Fed may moderate its rate rises buoyed US markets, with some encouragement north of the border from Canada. The Bank of Canada increased its rates by a less-than-expected 50 basis points to 3.75%.

This was seen as a sign that central banks are stepping back from overly aggressive rate rises, increasing expectations that the Fed would follow suit or at least signal a slowdown when it meets this week. Markets are predicting a 75 basis points rise.

In the UK, gilt markets and Sterling reacted positively to the appointment of Rishi Sunak as prime minister and the FTSE 100 broke back through the 7,000 barrier, ending the week up 1.12% at 7,047.67.

In contrast, Asian markets have lagged over the week, both in terms of performance and monetary policy.

* Data from close on Friday 21 October to close of business on Friday 28 October.

US markets rise off back of mixed data

US consumer confidence in the country dipped during October to 102.5, from 107.8 in September after two months of gains. Jobless claims rose from 214,000 to 217,000 while pending home sales of single-family homes plunged by more than 10% in September and mortgage rates rose to a two-decade high of 7.16%.

On the positive side, US GDP rose 2.6% annually during the third quarter, ahead of expectations for a 2.4% increase. It was the first boost to GDP for six months.

However, durable goods orders – seen as a proxy for investment activity – contracted in September and the latest US purchasing managers’ index (PMI) points to weaker private sector demand.

US markets lifted off the back of the mixed data. The S&P 500 ended the week up 3.95% and the Dow Jones was up 5.72%. Meanwhile, the Nasdaq managed to overcome poor technology earnings to finish last week up 2.24%.

Alphabet and Microsoft reported lower than expected third-quarter earnings, while Facebook owner Meta signalled that it would lose more cash next year as it continues to invest in creating the metaverse.

UK and European markets get ready for Rishi

The UK’s blue-chip index received a boost last week as the appointment of former chancellor Rishi Sunak as prime minister – replacing Liz Truss – suggested a return to greater political and economic stability in the country.

Mortgage rates – which rose to average highs of 6% off the back of Truss and ex-chancellor Kwasi Kwarteng’s much-maligned mini-budget – fell during the week, while markets are now expecting the Bank of England’s next interest rate hike to be 75 basis points or less.

At one point recently it looked as though that the increase may need to be around 150 basis points to curb rising inflation. However, UK interest rates are now expected to peak at below 5% in 2023, down from as high as 6.3% just after the mini-budget.

The much-anticipated Autumn Statement, originally scheduled for 31 October, was delayed until 17 November. That doesn’t necessarily bring an end to the UK’s corporate and economic woes though.

Data from the S&P Global/CIPS UK Composite PMI showed activity in the services and manufacturing sectors fell from 49.1 in September to 47.2 in October, below analyst expectations of a 48 reading. Manufacturing PMI hit a 29-month low of 45.8, while the services sector was also at a new low of 47.5. 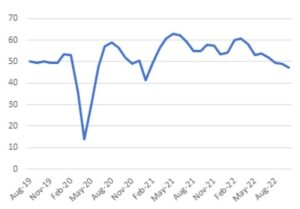 The CBI’s latest quarterly survey found business sentiment has reached the lowest level since April 2020 at -48. The monthly net balance of manufacturers that expected prices to rise over the next three months fell from +59 to +46 between September and October – the lowest reading since September 2021.

The European Central Bank increased interest rates as expected by 75 basis points to 1.5% – the highest since 2009. ECB President Christine Lagarde told reporters that “we will have further increases in the future,” adding that it might well be the case at “several meetings.”

This was interpreted by markets as a sign that much of the policy tightening has been completed and rates may not be raised as high as previously thought. The ECB deposit rate is now expected to peak at around 2.6% next year rather than 3%. Despite this, business activity still declined across the Eurozone in October. Its services purchasing managers’ index fell to 48.2 in October, down from 48.8 in September, hitting a 20-month low. The manufacturing PMI also fell to a 29-month low from 48.4 in September to 46.6 in October.

European natural gas prices also fell, helped by warmer weather and traders reducing reliance of supplies from Russia amid its invasion of Ukraine.

Unlike other financial policymakers, the Bank of Japan last week held interest rates at record low levels of -0.10. The central bank said it would continue to purchase as many Japanese government bonds as necessary, at a fixed rate, to keep 10-year bond yields at its 0% target.

While its manufacturing and services PMI data remained above the positive 50 reading, suggesting that growth continues, both consumer prices and the unemployment rate were up – at 3.5% and 2.6% respectively – above analyst expectations. The Nikkei 225 ended the week almost flat at 0.80%.

The economic growth news coming out of China was better than expected, with gross domestic product (GDP) data showing 3.9% annualised growth during the third quarter, up from just 0.4% in the previous period.

The next three months may be more uncertain though, as rising Covid-19 cases in the People’s Republic have led to lockdowns in several areas of the country.

Corporate data was already looking precarious with retail sales coming in at 2.5%, missing forecasts of a 3.3% rise.

China’s National Bureau of Statistics also reported a 2.3% annual fall in industrial profits for the first nine months of 2022, with manufacturing companies down 13.2%.

Amid these declines and new Covid-19 uncertainty, the Shanghai Composite closed the week down 4.05%. There was also a big outflow from Chinese equities amid the latest Communist Party Congress, which contributed to Hong Kong’s Hang Seng index falling 8.32% last week.

President Xi further cemented power by removing his premier Li Keqiang, historically a supporter of economic reforms. The next premier will not be announced until the National People’s Congress in March but it is expected to be Li Qiang, chief of the Chinese Communist Party (CCP) in Shanghai. This may further hit market confidence as he doesn’t have any central government experience and was criticised for his management of a two-month lockdown in Shanghai earlier this year.

However, Chinese stocks rallied on Tuesday amid social media speculation that a committee is being formed to reduce stringent lockdowns and exit the country’s zero Covid strategy. The yuan strengthened and the Hang Seng Tech Index jumped as much as 9.3%.