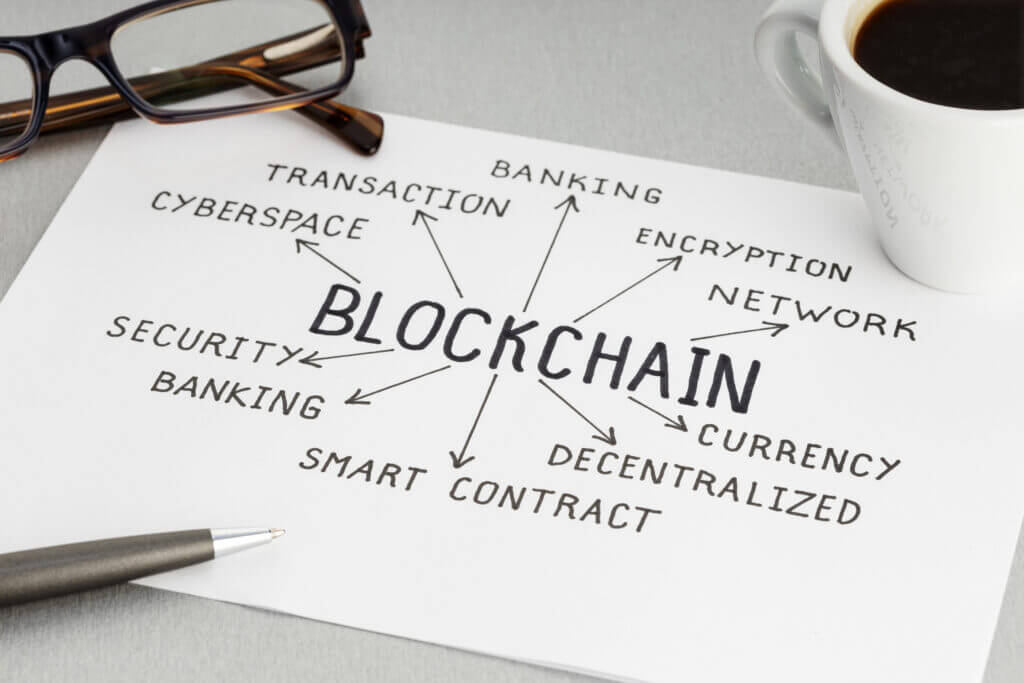 Over the last few decades, technological development has been astounding, with new tech disrupting every industry, from agriculture to pharmaceuticals to finance and banking.

One of the most notable innovations has been the advent of blockchain and, subsequently, the development of cryptocurrencies and digital assets such as NFTs.

However, while these innovations were once considered detached from the world of traditional finance, this is changing, as the benefits of blockchain technology can no longer be ignored by traditional financial entities or by newer FinTech firms and start-ups.

What is blockchain technology?

Blockchain technology comprises a decentralised public ledger made from a chain of “blocks” containing data – hence ‘blockchain’. There are numerous copies of the ledger globally, so each new block added must be agreed upon by the network of ledgers.

In the blockchain, each new transaction – including information pertaining to the owner – is recorded as a new block. Once made, these blocks cannot be altered or deleted – only added, in the chronological order in which the transactions are made, with a link to the previous block. Hence, the blockchain creates a permanent record of the transaction history.

How is blockchain disrupting finance?

Many everyday financial industry pain points have the potential to be improved by blockchain technology, improving efficiency, cost and even security.

Blockchain can speed up transactions.

In trade, a whole network of people involved in the exchange of goods is required to fill in forms to validate the transfer of ownership of goods, from the buyers to banks, to sellers and some intermediaries.

This process can take days to weeks. On the other hand, Blockchain accomplishes the same goal – ensuring ownership is agreed across an entire network, with everyone in the network receiving a copy – in one step.

This is just one example of how blockchain technology can help to speed up the efficiency of transactions – and this has numerous use cases in banking, particularly with international transfers and exchanges.

Blockchain technology can help to safeguard against different types of crime.

For one, because as transactions are recorded, they’re secured and encrypted – and they don’t pass through multiple intermediaries – fraud is much more difficult to accomplish. Buyers can be confident that their transactions aren’t being interfered with.

Moreover, the record of transactions kept on the blockchain is transparent, so people can see who has purchased and owns what, making ownership very easy to prove.

Once data has been inputted and agreed by the system, it would require all the ledger copies to be attacked at once to change or delete blocks in the blockchain, so ‘ownership’ of a particular block – which, for example, could represent an asset – can’t be stolen.

This feature of blockchain technology also makes transactions highly traceable. This means that exchanges associated with illicit activities can be traced back to a particular individual or entity more easily.

Blockchain can lower costs for individuals and businesses.

Traditionally, transactions made between individuals or entities are processed through several intermediaries, including banks, which often come with heightened fees – this is even more true when exchanges are made internationally.

For example, when a customer uses their debit/credit card to pay for goods or services, a fee is paid by the merchant to the bank, reducing their revenue.

However, blockchain technology allows banks to be bypassed altogether when making transactions, resulting in lower costs.

Cyberattacks are much less likely.

Data security is a huge priority in the financial industry, with cyberattacks and data breaches being one of the biggest threats to banks and FinTech companies.

Because blockchain is incredibly secure and data is encrypted as transactions are made – in addition to the fact that many computers across the world are responsible for maintaining the blockchain – it’s significantly more difficult to breach compared to traditional banking systems.

Greater security is a massive advantage to financial firms, as it improves customer trust and significantly reduces costs associated with protecting – and recovering – from cyberattacks.

So, will the financial industry be revolutionised by blockchain technology?

Traditional financial entities like banks are already incorporating blockchain technology into their operations.

In 2016, Barclays partnered with a start-up to orchestrate the first trading transaction on the blockchain. Big financial names such as PayPal are already working on integrating blockchain into their systems.

However, because this technology is relatively new, the regulation and legislation aren’t yet in place to facilitate the mainstream adoption of blockchain in the financial industry – and winning consumer trust will be another hurdle to overcome before this can happen.

That being said, it’s highly likely that blockchain will ultimately make over the financial industry over the next decade or two, reducing costs, increasing efficiency and improving the security of transactions.