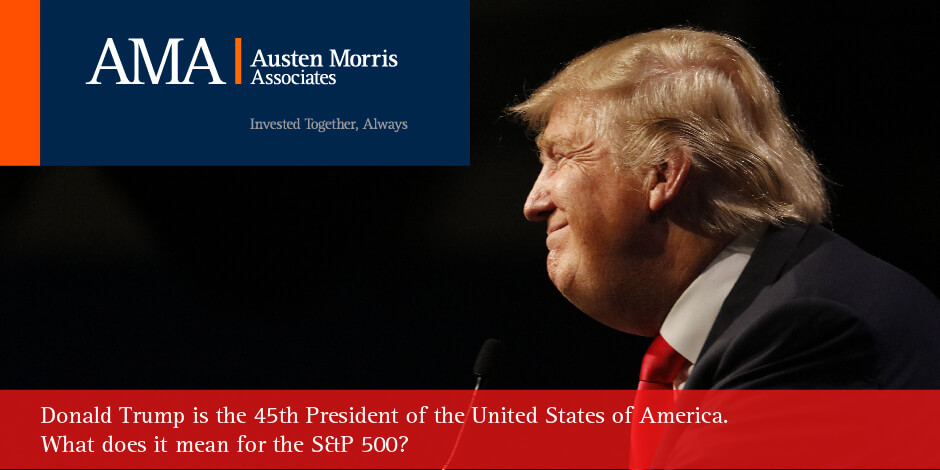 After one of the most spiteful and divisive election campaigns ever, Donald Trump will now be the 45th president. We are not interested in the politics or rhetoric that accompanies all such events. As investment professionals, we only care about what this will mean to the US economy and, in particular, to the S&P 500 index, which contains the shares of the top 500 US listed corporations.
Financial Experience.
There is no doubt that Donald Trump has huge amounts of business experience, mostly in real estate. Whilst people continue to question his net worth and business acumen, Trump surely has a very good understanding of how businesses succeed and fail.
Whatever the rhetoric of the election, we feel that Trump is unlikely to knowingly damage American business interests, especially being a Republican, a party whose interests are closely aligned to US big business.
However, running a country will be quite different to running a real estate empire. We think it’s best to look at the Republican Party’s policies to see how US business is likely to fare under President Trump.
Party Platform.
The Republican Party have an extensive “Party Platform 2016”, which you can download here.
If you read through its sixty six pages you’ll see some encouragement for the big US businesses that are in the S&P500, but the supporting policies are mixed. We picked out a few items that are likely to impact big business:

We state again” we are not interested in the politics – only the impact on the US/World economy! We think that the kind of policies listed above, and the many others listed in the Party Platform, will have a mixed impact on the businesses in the S&P500.
The Rise of the S&P500.
Since Barack Obama became the US president on 20 January 2009, the S&P has risen from 943 to just over 2000, a 100+% gain. However President Obama took over in the depths of the Great Recession, when values were low everywhere, and it’s as well to remember that since the S&P500 was started in 1923, the long term trend has been ever upward.
Conclusion.
There are clearly positive and negatives to Donald Trump becoming the new US president, but it’s far from clear what the overall impact on the S&P500 will be. However, as the world’s largest economy, the USA is hugely successful and that will continue. It will be those investors who can pick out new, successful sectors or undervalued companies who will gain the riches from the S&P500! This is a challenge for private, expat, investors, but we believe we have a team with the experience to help you win!