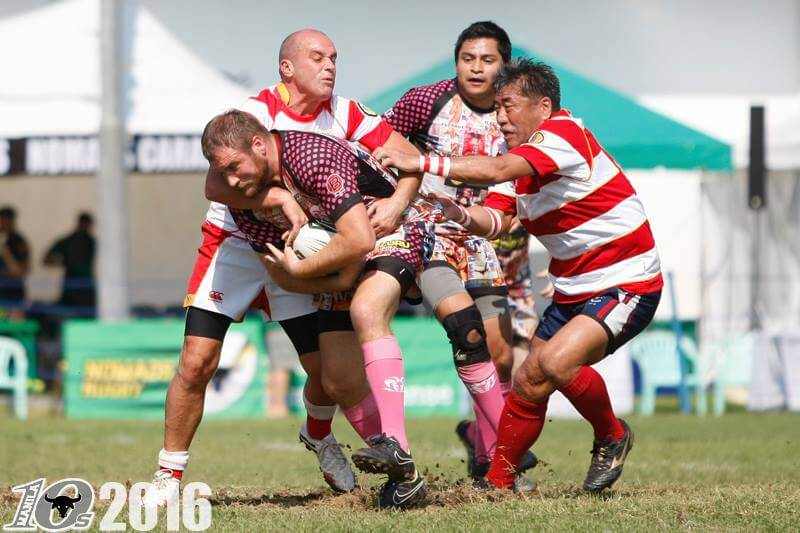 Dubbed by ESPN as “the best social rugby tournament anywhere in the world”, the 28th Manila 10s International Rugby Festival was played on 19th to 20th March at the Nomads Sports Club in Parañaque City.

This year’s event attracted thirty-six teams from around the world. North Harbour, New Zealand’s top side, raised the quality of competition in this year’s tournament, leading foreign clubs from Hong Kong, Singapore, Thailand, Malaysia, Indonesia, UK, Japan, Australia and the US. In addition, local clubs from Metro Manila, Cebu, Davao, Cagayan de Oro, Bacolod, Pampanga, Subic and Laguna plus the Philippine Under-14 and Under 16 teams, fresh from medal-winning performances in a Bangkok tournament, were in action during the two-day, four-division tournament.

The weather was perfect, the rugby fierce, and the atmosphere electric with up to 5,000 there to watch the action in Parañaque City.

Austen Morris Associates was proud to sponsor two teams: The AMA Vets & The AMA Barbarians. The more experience of our two teams, The AMA Vets, playedfantastic rugby all the way through their division. They won a thrilling quarter-final game 24 – 0 but, exhausted by that great effort, were narrowly defeated in the semi’s by 10-17.

The second of our teams, The AMA Barbarians, were unfortunate to draw their first game. This meant that they were then on course to play three times Cup champions the North Harbour Warriors in the semi-finals. They had played the same team in the semi’s last year and lost. Sadly, despite their best efforts and some heroic tackling, this year it ended with the same result: and the Warriors went on to win the Tournament for a record fourth time. The play-off for 3rd and 4th place between the AMA Barbarians and Alabang Eagles was a fast-paced game that saw the Barbarians capture 3rd place with a convincing 29 – 0 victory.

“A great weekend of rugby from all over the world” said Matt Cullen, PRFU director of rugby.

Austen Morris Associates Partners, Jon Holand, Matthew Riddington and James Colclough flew in from around the globe to attend the event with Martyn Davies Regional Manager and Founding Partner Greg Morris. Special thanks from all at Austen Morris Associates to Justin Barret, Director of Capital Platforms for organising both the Vets and Barbarian teams for yet again another superb Rugby 10’s event.