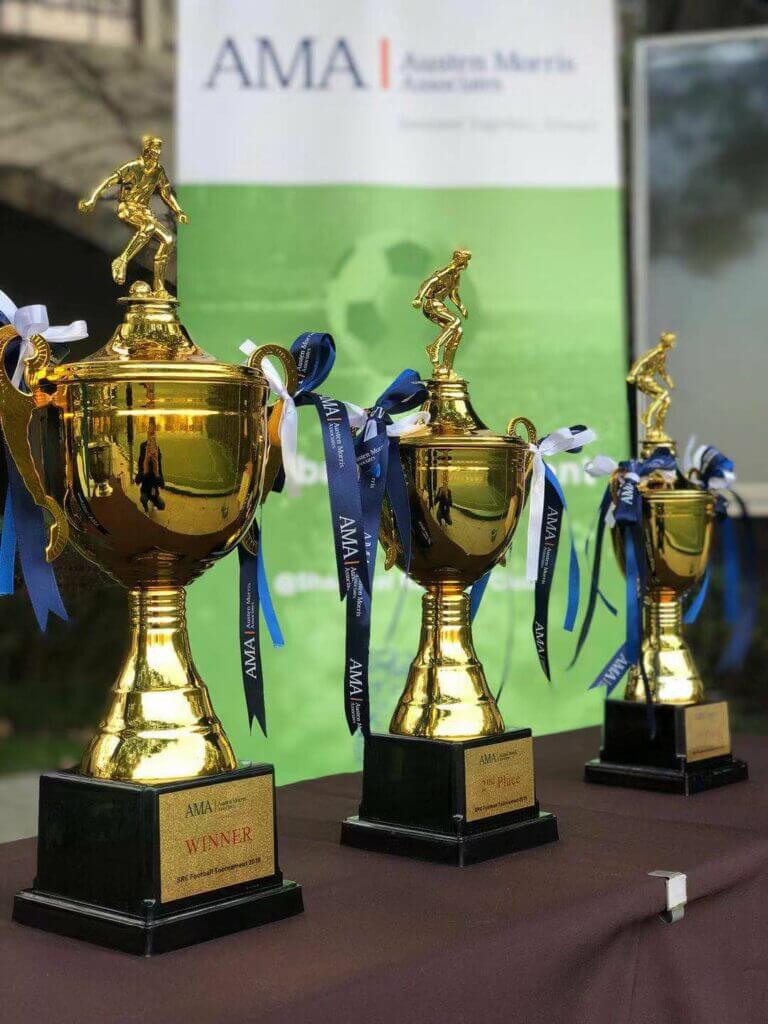 On Saturday the 7th of December, Austen Morris Associates and Senior Partner John Holand were proud sponsors at the Shanghai Racquet Club for the year-end Football Playoff.
The day started in the dark, crisp, cold early morning of Shanghai, the city murmuring awake as the sun rose. About 45 mins from downtown is the beautiful and exclusive Shanghai Racquet Club, an oasis in the middle of the Minhang district. Upon entering the gates, we were immediately struck with the neatness and precision of the compound gardens, not a blade of grass out of place. Walking around the vastness of the compound, amongst a plethora of tennis courts, you come out, and past their version of centre court through a tree line all measured to equal standing, one gets a glimpse of the days’ battleground.
The set-up is next to a green Astro mini football field. The spoils on display, trophies for the first three places, and wooden spoons for the team fairing the least in football days. The players slowly arrive from all areas of the world. David, the local F&B manager, keeps his staff busy as orders from lattes to espressos come flooding in as a reprieve from the bitter cold. There are plenty of handshakes and hugs as familiar faces exchange pleasantries and catch up before the game faces are put on. The sun begins to shine with the difference of sun to shadow like that out of an apocalyptic movie. With warm-ups complete and the traditional
photo of all participants taken, in the sun, of course, it was showtime!
The games were competitive! Whatever friendships that existed were undoubtedly left on the side of the pitch to be picked up only after the shriek of the final whistle. Participants not playing during a given match mingle on the side, chatting to each other and socializing in hearty spirit but with one eye eagerly on the game at hand. Watching the results with much scrutiny. Music in the background blaring upbeat songs ranging from 90’s disco to modern housekeeping, the atmosphere cheerful and the players pumped. Refreshments on hand and bottomless, beer only allowed from 1 pm. 4 teams of 7 (6 on the field, one substitute) battled out a round-robin of
two games against each other with the top 2 teams left to combat the final for the winner’s trophy and bragging rights. All the games were close as it came down to the last game of the league round to decide who would match up in the final. The Belgians were sitting on the sideline watching as they needed a result to go their way to make it through – powerless to do anything except chant support and heckle banter. They got the result. Belgians Vs Green Team in the final.
The final was less climatic. The Green Team ran away 3 – 0 winners over the enthused yet tired Belgians. The players walk off the pitch together, shaking hands and exchanging congratulations or sympathies. With all friendships picked up off the side of the pitch, all
players continued with banter and heroic stories of the day. The missed chances and the memorable plays, the what if’s and what could’ve been’s. The values of hindsight. There was ridicule in a laughable way only sport can produce, and there was affection for each other as respect,
football, and friendship won on the day. Beer is now served. The trophies were handed out with the medals to the teams deserved for each prize. Formalities were complete with a word from the chairman about the day and his thanks to AMA and all involved. And as the generations of old would conclude battle in feast and drink, the “Leave no Stijin Unturned” football battle was no different. David (remember David, the F&B Manager?) proceeded to put on a spread worthy of its diners and in line with the class and elegance of the spectacular surrounds of the Shanghai Racquet Club. The day was a huge success. All participants were humble in their thankfulness of the Austen Morris involvement and the relaxed manner we made the day about them. Thanks and cheers and clanking of beer glasses (plastic, so theoretical clanking) were seen across the side of the pitch with the Austen Morris few who were there to represent the company and give back to the community that has given so much to us. With all the heart to hearts, formalities and pleasantries, the introductions and getting to know you completed through the day, everyone entered the BBQ area as friends. The atmosphere was loud and fun, assisted by the free flow beer and the smell of steak on the coals.
The primary purpose of sport and sponsorship was on display as people sparked friendships new and old, the 19th hole (to borrow a golf term) was in total momentum, and conversation flowed as the battles of the day faded to the fun at hand. This slowly dissipated into the afternoon as, one by one, the weary footballers made their way back to families to tell stories of a successful day. What’s were exchanged (The Shanghai Handshake) and promises of reconnection on the horizon made. The sponsor’s Senior Partner Jon Holand, Consultant Willem le Roux and Consultant Justin le Roux left as last men standing in quiet the satisfaction of having contributed to the memories of this great day!